Behind the Scenes with Stephen Pym, illustrator of Holly the Honeybee Dancing Star

March 6th, 2019
Behind the Scenes with Stephen Pym
Explore what it was like to illustrate Holly the Honey Bee Dancing Star by Gordon Winch through Stephen Pym's incredible preliminary sketches and artwork and explanation about the process.

Designing a honey bee character was more difficult than I expected. Both the author Gordon and I wanted the character to edge towards looking like a real bee. The problem I found was that despite the general concept of a honey bee being quite endearing, in real life they have the appearance of insect-alien-monster-nightmare creatures, especially the faces close up! Thus I spent a fair bit of time trying to come up with a character that was cute, was anthropomorphic enough to be relatable, and yet with sufficient bee realism.

Here are some of my experiments: 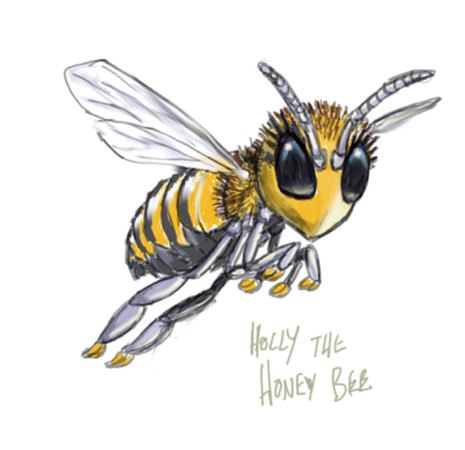 This attempt as too animalistic 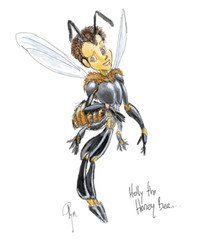 This one was too anthropomorphic

It was helpful to see how others had tackled this problem. Most fused the thorax and abdomen (and sometimes even the head) into a single “puff ball” (Buzzbee from The Hive). Many only had two pairs of legs instead of three (Barry B. Benson from Bee Movie; Maya the Bee). Very few retained those black, sinister-looking eyes. All would sprout the antennae from the top of the head rather than from between the eyes. For me, all these elements were critical for a real bee. 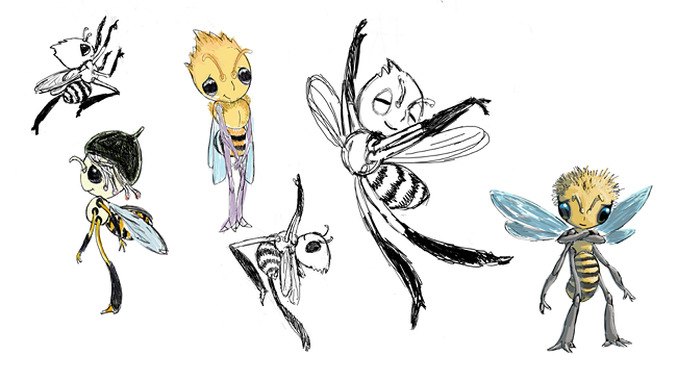 So whenever I had a spare moment and there was paper handy, I'd draw versions of the character, and Holly eventually emerged. The last challenge was to work out the hair. At first I considered spiky hair like a real bee has. It didn't look quite right so I just covered the top of her head with a beanie. Despite looking cute, this was a step too far in the direction of anthropomorphism. I switched the beanie for a gum nut, but this was a step to far in the direction of May Gibbs.

In the end I settled on a shortish mop of burgundy hair that complimented her yellow body. 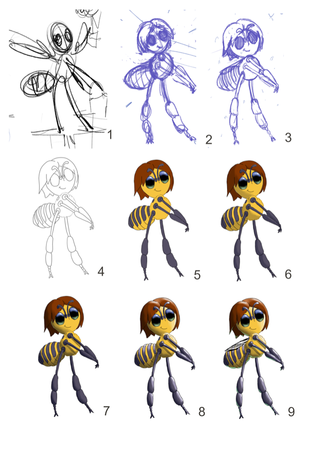 Once I had settled on the general look of the character, every body part had to be worked out. I then broke the character down into simple shapes and worked out a way of re-constructing her that could be applied no matter what the angle.
The book was done entirely digitally, using a free graphics program called GIMP.

Here is the progression of steps I used throughout the book, as seen by the Holly illustration:

1.    Storyboard – very quick and crude, just throwing down the ideas

3.    Refining the roughs to the stage where I'm confident they can be inked

5.    Adding the local or base colour. At this step I also did the eye reflections

9.    Add the reflected light on the edge of the deepest shadow, and finally the wings are added last because they're semi-transparent.

You can see more of Stephen Pym's artwork at: 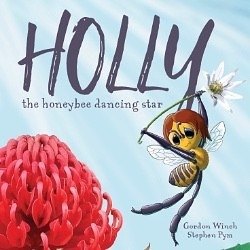 AUTHOR : Gordon WinchILLUSTRATOR : Stephen PymHolly the honeybee is the dancing star of her hive: she waggles, she wiggles, and she waggles again. But is there a secret message in Holly’s waggle dance? And could it help the bees survive through a long, hot summer?
Buy Here
Share this article...

Thank you for your comments, they will appear shortly once approved.
View by Category
BooksEventsLatest ReleasesBehind The ScenesCompetitions
Latest PostsPopular Posts
1
How to Illustrate a Brilliant Board Book!July 23rd, 2021
2
How to Illustrate a Humorous Picture Book!June 28th, 2021
3
How to be a Super Detective!June 23rd, 2021
4
Get to Know Illustrator Stephen PymMay 15th, 2021
5
Scoop Series Featured on NSW Premier's Reading ChallengeMay 13th, 2021
1
Ellie the Pug - How to Care for a PugApril 8th, 2019
2
The Last Anzac - A Letter from Alec Campbell to his MotherApril 1st, 2019
3
Patrick Shirvington: The Story Behind Can You Find Me?October 6th, 2017
4
Can You Find Me? selected as a Notable Book for 2018 by the CBCAFebruary 27th, 2018
5
Behind the Scenes with Anil Tortop, illustrator of Scaredy CatJune 11th, 2018